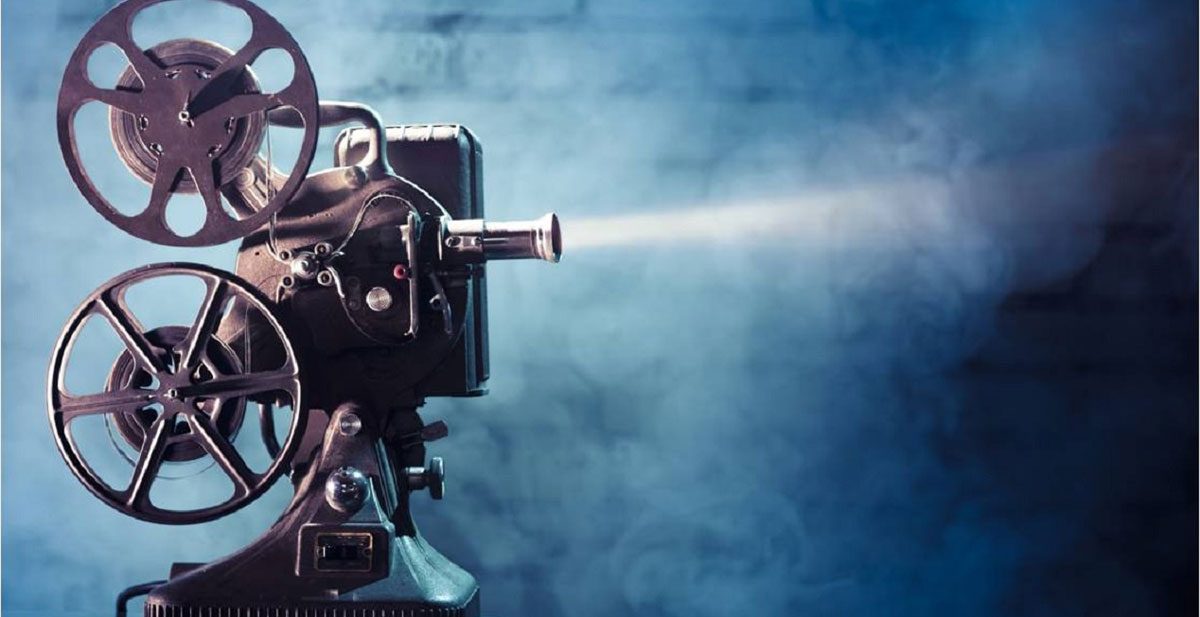 Cinema lovers in Ibiza are in luck with initiatives such as those organized by the San José City Council this summer 2020 in Sant Jordi or this one that we tell you about in the town of San José.

The Divendres de Cine series organized throughout the year in Can Jeroni becomes during the summer months Fresh Cinema and the projections are transferred to courtyard of the Old Schools of San José, so you can enjoy great movies outdoors, just like the heat.

The appointment is every Friday in July and August of 2020 at 22 hours.

The films shown are from quality and they are small jewels somewhat removed from the commercial circuit, with many award-winning and critically endorsed films, so it is a great opportunity for film buffs in Ibiza to enjoy them on the big screen. At the moment only the tapes that are projected in the month of July have been published, all Spanish.

All films are screened at original version with Spanish subtitles (VOSE).

-Friday, July 3, 2020: "The infinite trench" (Spain, 2019) directed by Jon Garaño, Aitor Arregi, José Mari Goenaga. Synopsis: Higinio and Rosa have been married for a few months when the Civil War broke out, and his life becomes seriously threatened. With the help of his wife, he will decide to use a hole dug in his own house as a temporary hiding place. The fear of possible retaliation, as well as the love they feel for each other, will condemn them to a confinement that will last for more than 30 years. Awards: Goya Awards 2019: best actress (Belén Cuesta) and sound. 15 nominations. San Sebastian Festival 2019: 4 awards, including best direction and script. Feroz Awards 2019: Best Actress (Belén Cuesta). 6 nominations. 2019: Forqué Awards: Best Film. 3 nominations. Platinum Awards 2019: 8 nominations including best film, director and script.

-Friday, July 10, 2020: "O que arde" (Spain, 2019)Directed by Oliver Laxe. Synopsis: No one waits for Amador when he leaves prison after serving a sentence for causing a fire. He returns to his house, a lost village in the mountains of Lugo, where he will return to live, in the calm rhythm of nature, with his mother, Benedicta, his dog Luna and his three cows. Awards: Cannes Film Festival 2019: Un Certain Regard - Jury Prize. Goya Awards 2019: Best Cinematography and New Actress. 4 nominations. Mar del Plata Festival 2019: best film and script. Feroz Awards 2019: 5 nominations, including best film and best director. Forqué Awards 2019: nominated for best film. Gaudí Awards 2019: best European film and photography.

-Friday, July 17, 2020: "Outdoors" (Spain, 2019) directed by Benito Zambrano. Synopsis: A child who has escaped from his town feels the screams of the men who are looking for him. What remains before him is an infinite and arid plain that he will have to cross if he wants to move away definitively from the hell from which he is fleeing. In the face of his persecutors at the service of the town foreman, his steps will cross those of a shepherd who offers him protection and, from this moment, nothing will be the same for either of them. Awards: Goya Awards 2019: best adapted script and song. 5 nominations. Valladolid Festival - Seminci 2019: official section (opening film).

-Friday, July 24, 2020: "Who kills with iron" (Spain, 2019)Directed by Paco Plaza. Synopsis: Mario, an exemplary man, lives in a town on the Galician coast. In the nursing home where he works as a nurse, everyone appreciates him. When the best-known drug trafficker in the area, Antonio Padín, recently released from prison, enters the residence, Mario tries to make Antonio feel like home. Now Padín's two sons, Kike and Toño, are in charge of the family business. But a failure in an operation will take Kike to prison and generate a great debt with a Colombian supplier. Toño will go to the nurse to convince his father to take on the debt. But Mario has his own plans. Awards: Goya Awards 2019: Best Upcoming Actor (Enric Auquer). 3 nominations. Feroz Awards 2019: Best Supporting Actor (Enric Auquer). 3 nominations. 2019 Forqué Awards: Nominated for Best Actor (Enric Auquer). Awards He enjoyed 2019: best dry actor. (Enric Auquer) and production management.

-Friday, August 7, 2020: "Maya" (France, 2018), directed by Mia Hansen-Løve. Synopsis: December 2012. After four months of captivity in Syria, two French journalists are released. Gabriel, the youngest, is in his early 30s. After passing medical check-ups and answering many questions, you can be with your family and your girlfriend. A few weeks pass, and unable to find a direction in his life, he decides to go to Goa, where he grew up. There he will meet Maya.

-Friday, August 14, 2020: "A Rainy Day in New York" (USA, 2019), directed by Woody Allen. Synopsis: Gatsby Welles and Ashleigh are a young couple in love with college students who are preparing to spend a weekend in New York City. She is going to interview the renowned filmmaker Roland Pollard, who is going through a moment of creative crisis, and during his hazardous adventure she will meet the captivating actor Francisco Vega. For his part, Gatsby will also meet a young woman, Chan, who will help him put his feelings in order. The rainy weekend will be full of encounters, misunderstandings and misunderstandings.

-Friday, August 21, 2020: "Les Bonnes Intentions" (France, 2018), directed by Gilles Legrand. Synopsis: Isabelle is addicted to charitable causes. He is always going from one humanitarian action to another. The arrival of a charismatic teacher at the social center where she works threatens her position. As a way to restore her reputation, Isabelle decides to open a refugee driving school, whatever the cost.

-Friday, August 28, 2020: "A picture with Yuki" (Bulgaria, 2019), directed by Lachezar Avramov. Synopsis: A Bulgarian man and his Japanese wife, who met and married while living as immigrants in Canada, plan to have a baby and travel to Bulgaria to begin an IVF procedure. There, they become involved in a tragic incident that takes the life of a child. Nothing can be the same anymore. 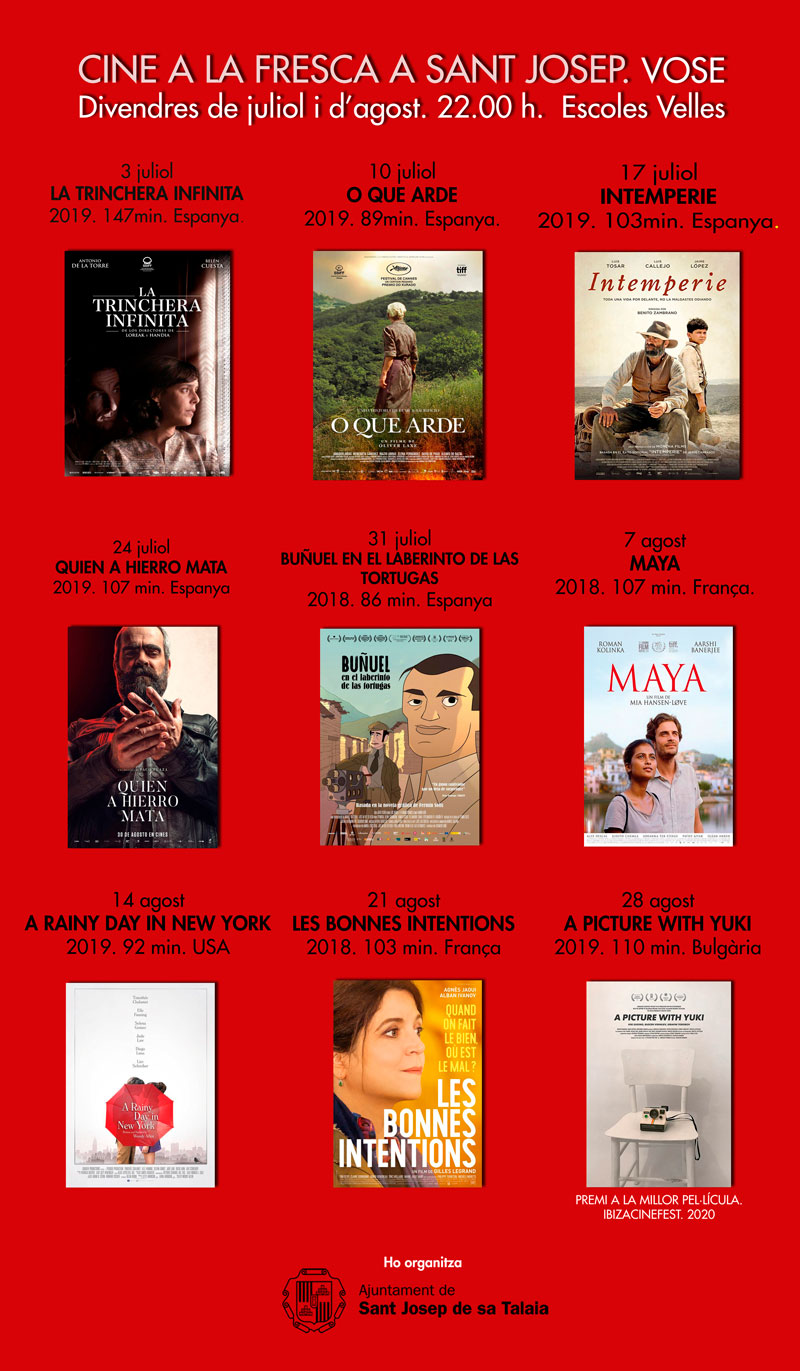