Costume parties in Ibiza Where to buy your costume?

Must see what we like a costume on this island! Over the years, we have made it clear that we are losing Costume parties in Ibiza, those in which the only requirement to attend is to wear the most original or striking attire.

HR Flower Power parties They have always given us a lot of play. Psychedelic clothes, necklaces, glasses, inflatable guitars, wigs Everything goes! In addition to the popular evenings Pacha Ibiza's Flower Power, parties with this theme are celebrated throughout the island. Maybe the most popular is that of San Antonio, which takes place in January. A night in which "the power of flowers" spreads through the marquee on the promenade and through most of the restaurants, bars and streets of the center. San Lorenzo, San José or San Carlos also They have their own Flower.

Another Costume parties in Ibiza to which we aim en masse is to that of 'The move'. You don't have to go in disguise, but therein lies the grace! It is also celebrated in San Antonio, at the end of January, and brings together enthusiasts of the music from the 80 as the unconditional of the transformation. Wigs, impossible prints, fishnet stockings, leather and fluor colors they flood the tent and the streets of the municipality.

Carnival and Halloween in Ibiza

If there are two dates that we do not skip are Carnival and Halloween. Everyone gets on the party bandwagon with activities for children, adults, us Specific themes, free, paid, free ...

En Carnival all the municipalities show their floats and, in turn, present interesting programs of events.

Each filtering bag "Older", for our part, We found several options in restaurants, hotels or places to party on the island.

If you are one of the most privileged, you can even attend events in private villas. Many of us still remember the Birthday Party who organized the artist Lio Malca and Alejandro Lozano in El Polvorín de Santa Gertrudis. According to the Local Police, More than a thousand people attended the celebration, a celebration with a Thematic concrete: Stanley Kubrick's film 'Eyes wide shut'. Apparently there were 300 guests but "it got out of hand." The consequence? A fine of 75.000 euros.

Perhaps Lio Malca's was the most famous, but it was not the only one. There have also been Pajamas, Alice in Wonderland, Indians and cowboys ... Until Guy Laliberté, founder of Circo del Sol, gives from time to time incredible costume parties in your Ibiza villa! When it comes to organizing them, imagination has no limits and, if it's about celebrating Halloween, it overflows!

The eve of All Saints has hit hard on the island. Some of the parties most famous are the Hard Rock Hotel Ibiza or of Boutique Hostal Salinas. However, little by little more are those who organize funny parties in honor of the deceased.

Find your costume in Ibiza

You sign up for one or another party, what is clear is that your costume must be unique. If you have not found it yet, you may not have gone through these stores in Ibiza:

-LA CUCAÑA
A classic if ever there was. They all have it and, if not, they ask you! You will hardly find more variety on the island. They also have professional makeup and endless accessories to complete your costume.

-JUGUETERÍAS TUR
If you thought they only had costumes for children, you are very wrong. There are also adults, both in Carnival and Halloween. In addition, you will also find makeup and various accessories. 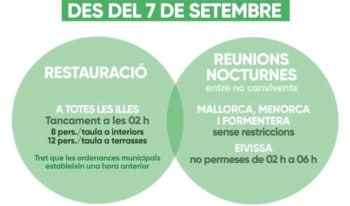