TICKETS HERE !! Acoustic concerts of the Golden Live Shows in Santos Ibiza with artists such as Viva Suecia, Sex Museum, Zahara or Marlango and Carolina Durante. 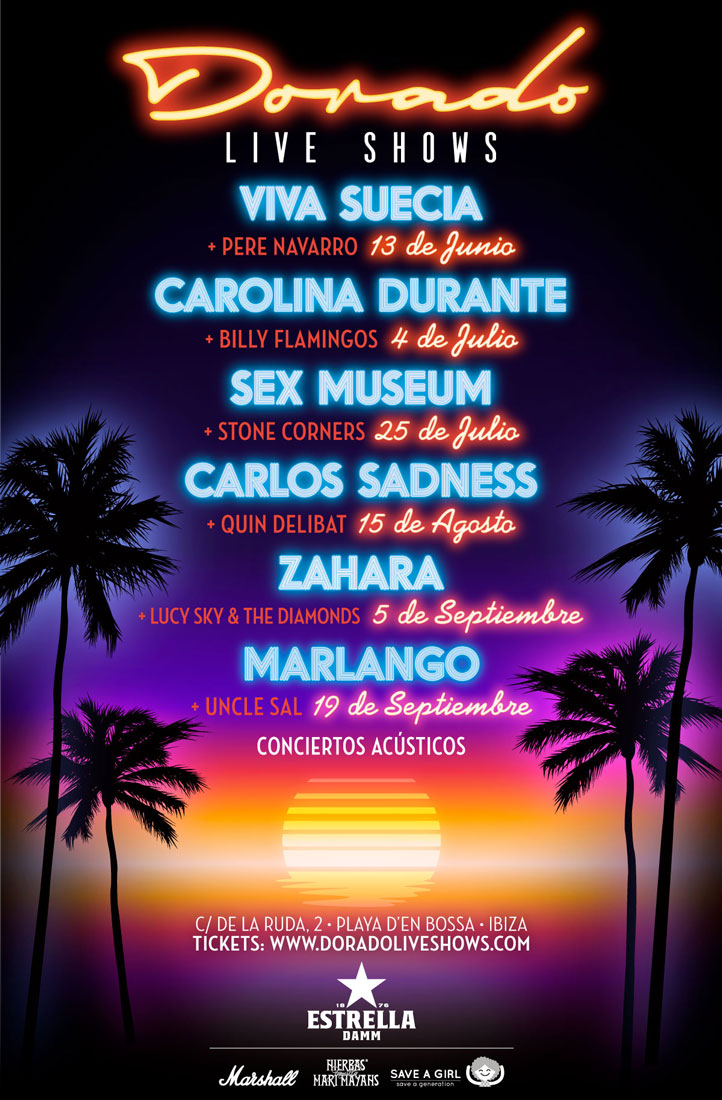 They return this 2019 summer the Golden Live Shows to Santos Ibiza. Great acoustic concerts by artists such as Viva Suecia, Sex Museum, Zahara or Marlango

This summer 2019 returns to the hotel Santos Ibiza the cycle of acoustic concerts Dorado Live Shows, turned into one of the essential appointments of the musical calendar in the island and that brings again to Ibiza some of the most interesting artists of the independent musical panorama.

For the fourth consecutive summer, you will be able to enjoy a privileged environment of some of the best names in Spanish indie / rock. In the poster of this year the concerts of Viva Sweden, Sex Museum, Carolina Durante, Carlos Sadness, Zahara and Marlango, accompanied by groups of the Ibiza scene that will act as support band.

The post rock cycle of Long live Sweden el 13 June 2019 Thursday. Three weeks later, the July 4, 2019 the murcian band Carolina Durante will show his strength on the Santos stage. The incombustibles Sex Museum and his rock psychedelia will put music to the Anniversary party of Dorado Live Shows on July 25, 2019. The Catalan singer and illustrator Carlos Sadness act the August 15st, 2019, while the pop singer-songwriter Zahara, who has just released the album "Astronauta", is the protagonist of the session of the 5th September 2019. The group closes the cycle Marlango, with the voice of Leonor Watling and the piano of Alejandro Pelayo putting the finishing touch to this summer full of good music on 19th September 2019.

In addition, in each of the appointments, an Ibiza group will be the opening act. Pere Navarro, Billy Flamingos, Stone Corners, Quin Delibat !, Lucy Sky & Diamonds and Uncle Sal they are the chosen bands.

The appointment has again with the sponsorship of Estrella Damm and with the collaboration of Hierbas Ibicencas and two major rock brands: the loudspeaker signature Marshall and the guitar house Gibson, in addition to the support of City of San José. The consistory has approved a new ordinance that allows live music twice a week for two hours, given the problems that emerged last summer around live music.

In addition to enjoying great artists in a luxury enclave and facing the sea, the Dorado Live Shows fulfill a function solidarity, As the 15% of money raised with the tickets will serve to help the NGO "Save a girl, save a generation", to fight against genital mutilation that many women suffer all over the world.

Tickets cost only 20 euros and it includes you a Damm Star. You can also get a subscription for all the concerts by only 80 euros.

Enjoy in Ibiza and by the sea the purest sound of your favorite artists thanks to Dorado Live Shows.