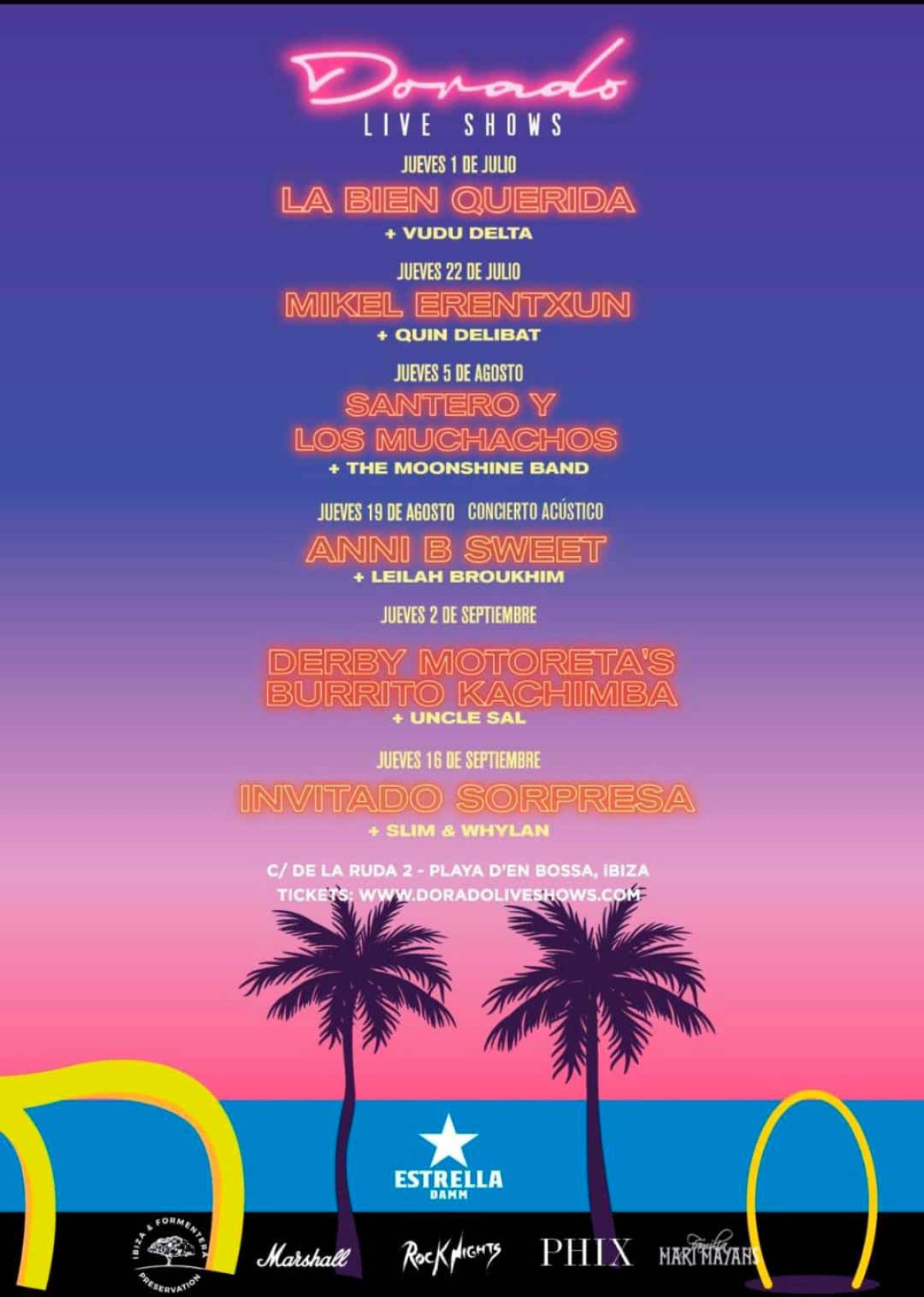 Santos Ibiza, hotel that for years has been one of the most vibrant meeting points in Playa d'en Bossa, this summer restarts its cycle of acoustic concerts Dorado Live Shows.

All an essential in the summers of Ibiza that reaches its sixth edition this 2021 to offer you acoustic concerts of some of the most outstanding artists of the Spanish rock and indie scene. And where? In a unique location, facing the sea and the pool of Santos Ibiza.

Through the cycle, the cream of the current music scene has passed, artists and groups such as Loquillo, Dorian, Ivan Ferreiro, El Kanka, Miss Caffeine, Amaia, Sidonie, Arizona Baby, Carlos Sadness or Zahara, among many others.

The cycle of this 2021 inaugurates it The Well-Beloved with a concert the 1 July 2021 Thursday, a Bilbao singer who can be said to have this music in his blood, since his father, drummer Txabi Villaverde, was one of the pioneers of rock music in Bilbao. Ana Fernández-Villaverde is one of the most outstanding artists of the native indie and in her more than 15 years of musical career she has published songs such as "At the moment April", "Today", "Strange powers" or "Dynamite". The indie rock band will perform with her Voodoo Delta.

A whole musical institution like Mikel erentxun is the second confirmed artist of the summer, and will offer a concert on Thursday 22 of July of 2021. The singer-songwriter from San Sebastian has a career spanning over 35 years, first as a vocalist for Duncan Dhu and later as a soloist. His recent album "Friends on duty" They have a long career with songs from 28 albums from their time in the group and alone. Before Erentxun the Ibizan group will sound Quin Delibat, led by Jordi Cardona.

Santero and Boys They define themselves as a "relaxed rock band." The band formed by Miguel Ángel Escrivá, Josemán Escrivá and Soni Artal will be performing live in Ibiza on Thursday August 5 2021, supported by The Moonshine Band. The Valencian band has released the albums "Fortune" y "Rioflorido", full of elegant and cared songs.

El Thursday August 19 2021 we will enjoy the talent of one of the most outstanding artists of the Spanish indie scene, the malagueña Anni B Sweet, preceded by lelilah. The singer-songwriter, real name Ana Fabiola López Rodríguez, conquered our hearts with her songs mainly in English and that soft, elegant and melancholic style of songs like "Take on Me", "Getting Older", "Chasing Illusions" or "Bon Voyage".

The last performance confirmed for the moment is that of Derby Motoreta's Burrito Kachimba, a peculiar Sevillian band that combines flamenco, rock and psychedelia to project an irresistible energy on stage and that we can enjoy the Thursday, September 2, 2021. One of the most beloved bands on the island, Uncle Sal, will act as the opening act.

And as is customary in this musical cycle, the last performance of the summer on 16 2021 de septiembre it has been a surprise until the end, although it has already been confirmed that who will act to close the cycle this year will be Johnny burning, also known as Johnny Cifuentes, Johnny Crocodile or, at home, like Juan Antonio Cifuentes Laso, this fireproof rocker from Madrid is a member of the mythical Burning. Johnny will play preceded by Dogs, the guitar rock duo formed by Alex Slim and Genis Whylan.

The tickets are already on sale. As usual, the quote has a component solidary, and this year it has been chosen to support the work of Ibiza Preservation, to continue taking care of the natural beauty of our islands, to this NGO 10% will be donated of each entry. Tickets, as always, cost 20 euros and include a Estrella Damm very cool.

Moreover, the afterparty par excellence of Dorado Live Shows is still the popular party Rock Nights, but this year it happens to be held the day after the concerts, that is, the Friday, and change location, from Pikes to Romeo's Motel & Diner.

It's already taking time to book your tickets to enjoy great artists this summer!