The Thrill is Here, Teatro Ibiza brings you the great figures of blues 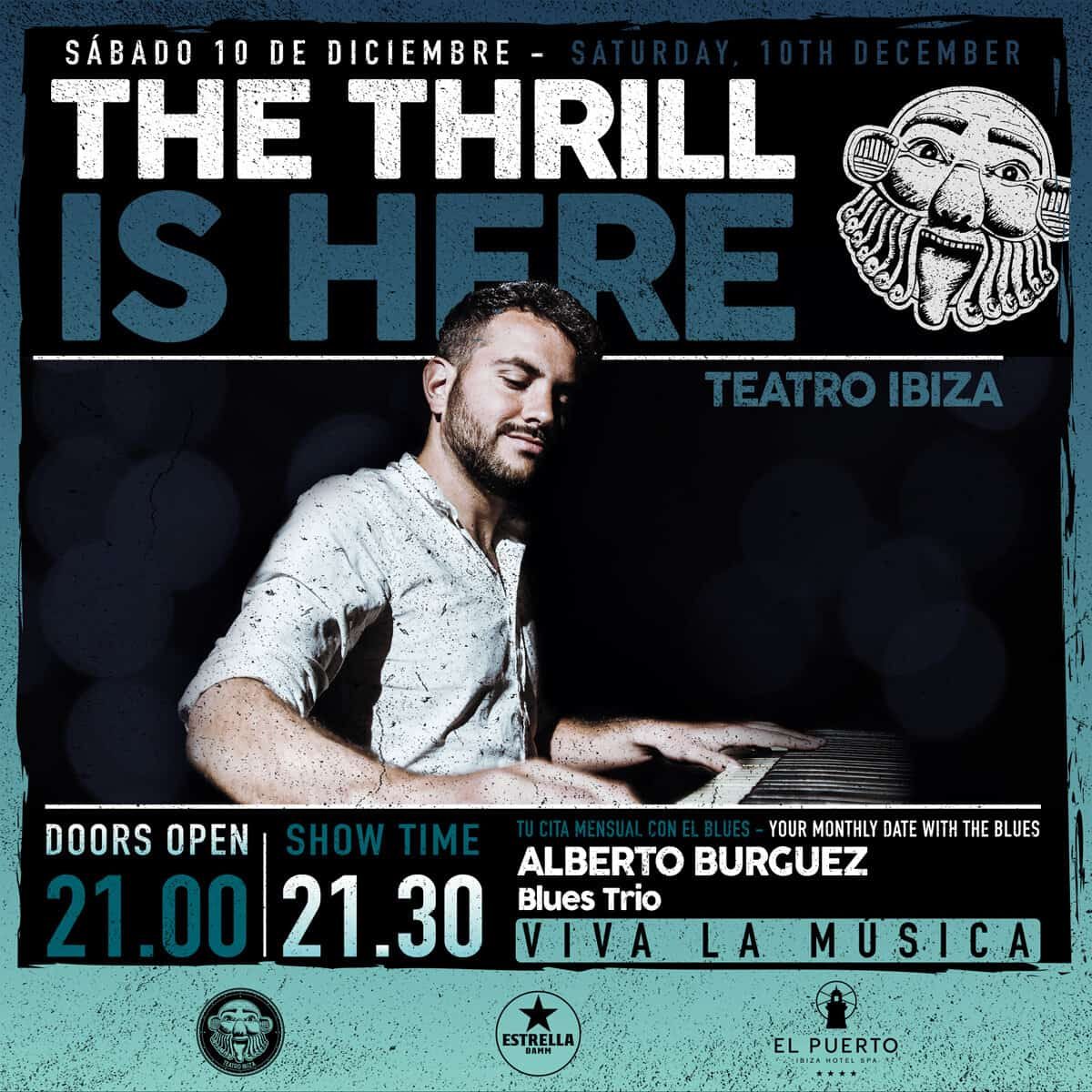 Teatro Ibiza organizes The Thrill is Here, an exciting series of concerts that brings the best national blues artists to Ibiza, next appointment with Alberto Burguez Blues Trio

The concert hall Teatro Ibiza has organized The Thrill Is Here, a new cycle of concerts that will allow us to enjoy on the island of best blues artists of all country.

Exciting live concerts held once a month and that will bring us the most important figures of the genre, big stars habitual in the great blues halls and festivals of the country and all of them bluesman of recognized prestige.

The premiere of The Thrill is Here is performed by the Uruguayan singer and guitarist based in Barcelona, Martin Burguez el 2 June 2022 Thursday. The door opening is at 21 hours and the performance starts at 21: 30 hours.

Burguez has been part of different musical groups until creating his own project, Martin Burguez & The Jump Club, with whom he has released three albums. Guitarist, singer, composer and producer, Burguez has a clean style that delves into both the great masters of blues and the sound of the West Coast or Jump Blues, with influences from jazz, swing and R&B from the 30s, 40s and 50s.

The cycle continues on Friday 15 2022 July with the Asturian musician louis source, also know as 'The amazing mechanical bird', an artist with enormous prestige in the underground circuit. Fuente will offer an eclectic concert with roots music as a base where shades of black music such as soul or reggae will be appreciated.

Guitarist, composer and singer, Luis Fuente or the 'Incredible Metallic Bird', is a member of well-known underground circuit bands such as Mama Boogie, Guayaberas Negras, Bird's Soul, Wipe Out, Blues Stomperso 0 Mardi Jazz, with which he has toured festivals and venues throughout the country. He has collaborated with artists of the stature of Frank T, Tonino Carotone, Julián Maeso or Tonky de la Peña.

Later, the Friday 12 of August de 2022, we can enjoy the talent of the Argentine musician based in Madrid Jose Luis Pardo, with a long musical career that has made him tour all over the world.

Jose Luis Pardo is one of the few non-Anglo-Saxon artists who move comfortably around the international blues circuit. With his personal project, he has toured half the world and has also accompanied international artists such as Corey Harris, Bob Margolin, Tail Dragger, Michael Burkso or Vasti Jackson. Brown has a ten albums released, is the director of the Madrid Blues School and also produces albums and tours through his production company Blues R Us.

The Madrid singer Betta Berodia and the great guitarist Pablo Sanpa star in an exceptional high-quality musical show with an irresistible repertoire that includes some of the great themes of African-American music, a performance that will brim with elegance and groove.

The fifth edition of this irresistible musical series brings us a concert by Mayan Porter, American performer and composer based in Formentera, the Saturday 22 of October 2022 at 21 hours. The artist will be accompanied by her base trio, formed by Isaac robles to the guitar and David Barona to percussion, and, on this occasion, they will have the special collaboration of the Barcelona saxophonist Pol Prats, with a long career in the Barcelona swing, blues and rhythm&blues scene and who has played with great national and international artists. A musical performance of pure luxury.

Iker Piris, the famous bluesman from Tolosa (Guipúzcoa), a true guitar virtuoso, stars in the session of November 12 Saturday of 2022 at 21: 30 hours (doors open at 21 hours, don't you dare be late!). Iker Piris is self-taught on the guitar, he began playing live in 1997 and in 2009 he graduated from the Superior Conservatory of Music of the Basque Country. From 2009 to 2018 he led the group The Romanticos, with which he released three albums: "My time" (2012), "Do it yourself" (2014) and "Good Vibrations" (2017). It will be a great luxury to be able to enjoy it on the island with the Iker Piris Blues Trio.

The next scheduled performance is with the renowned Uruguayan pianist alberto burguez el Saturday 10 de December 2022. He Alberto Burguez Blues Trio is made up of Burguez himself at the piano, brother of the guitarist and singer Martín Burguez, the Argentine Christian Morana, one of the regulars in Madrid blues clubs, on bass, and the Asturian resident in Ibiza David Barona, to the battery. The band will combine songs from their latest album and blues, swing and boogie woogie classics. As usual, the doors open at 21 hours and the show starts at 21: 30 hours, do not be late!

An exceptional musical initiative resulting from the collaboration between Johnny Harmsen, head of Teatro Ibiza, and the percussionist David Barona, a regular on the island's concert circuit, which will undoubtedly delight lovers of good music on the island.

The Thrill Is Here