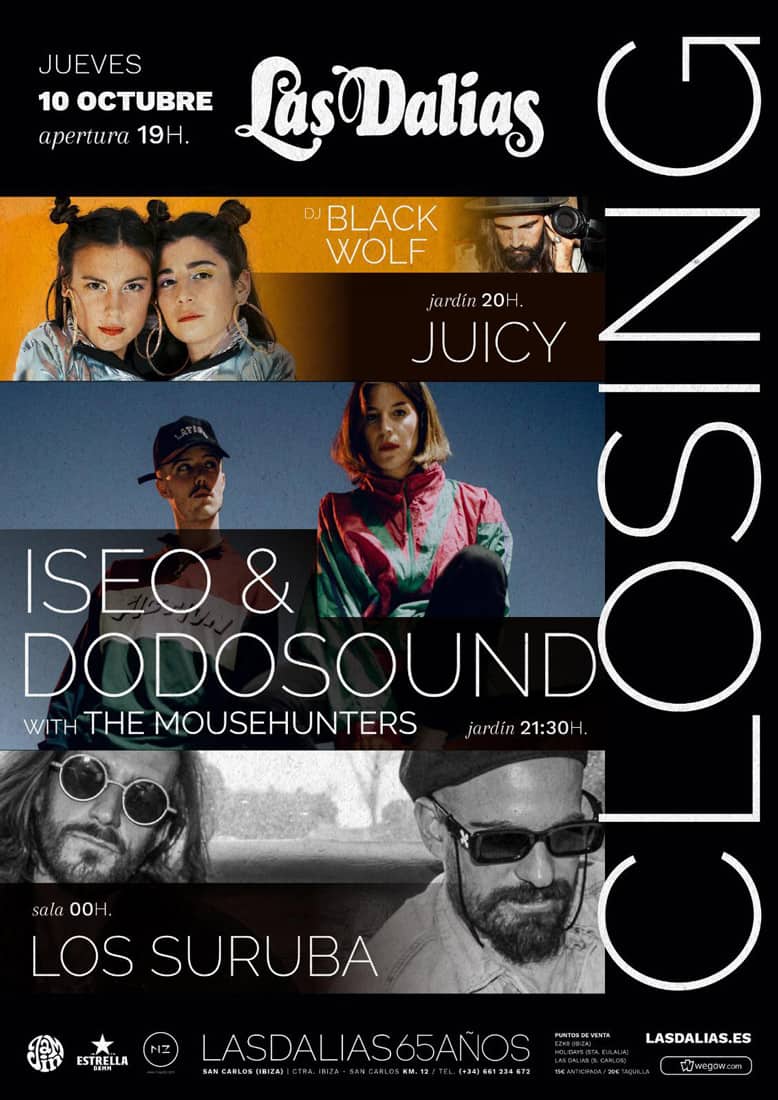 Iseo & Dodosound with The Mousehunters, Los Suruba, Juicy and Dj Black Wolf make up a luxury poster for Las Dalias Closing on October 10 2019

After a spectacular season, full of musical, cultural and recreational events for the celebration of its 65º Anniversary, Las Dalias Ibiza prepares to say goodbye to summer with a big party Closing.

The appointment is 10 October 2019 Thursday from the 19 hours and will feature a luxury poster.

The highlight of the night will be the expected performance of the Navarre duo Iseo & Dodosound at 21: 30 hours in the Garden. Accompanied by the winds section The Mousehunters will make Las Dalias stage vibrate with its irresistible reggae, dub, soul and R&B rhythms. The duo, created in 2014, was born from the union between the composer and musician Iseo and the DJ and producer Dodosound. Despite having only two albums to their credit, Iseo & Dodosound have had a great reception among the media and the public of our country, filling rooms with their combination of digital and organic elements, and its powerful direct.

The appointment starts at Garden of Las Dalias from 19 hours with Dj Black Wolf warming up with a session of World Music high quality. Next it will be the turn of the Belgians Julie Rens and Sasha Vovk, which make up the duo Juicy. The duo will offer a show full of energy and with an overflowing staging from the 20 hours also in the garden. Using keyboard, drum machine, guitar and their magical voices will recover R&B and rap hits from the 90s to cover them in a unique way.

The party continues after 24 hours in the Interior room of Las Dalias with the electrifying electronic duo Los Suruba, composed by Álvaro and Delmar. Spanish DJs have been standing on the scene for years tech house and they will bring Las Dalias back to powerful energy and good vibes of his sets.

At the party the classic ones will not be missing foodtrucks of Las Dalias with all kinds of Appetizing culinary proposals, so you don't lack the strength to dance.

The Advance tickets they cost 15 euros and you can buy them already in EZK8 (Ibiza), Holidays (Santa Eulalia) o Las Dalias Café (Saint Charles). You can also buy them online through wegow.com. Do not delay buying yours!