You can't miss This
The Cala Llentia monument, in San José, is made up of thirteen basalt columns designed by the artist Andrew Rogers and paid for by

One of the latest caprices in Ibiza of the famous Guy Laliberté, creator of the Circus of the Sun, was the installation near his mansion in the island of the work 'Time and Space' of the Australian artist Andrew Rogers.

Since the 2014 year, those who visit the area of ​​Cala Llentia, in the municipality of San José, meet this curious monument known as the Ibizan Stonehenge Is thirteen columns of basalt arranged in circular form which the sculptor carved right there. In the center of the representation stands another Monolith of 24 meters, higher than the rest, and whose summit is topped by a 23 gold plate carats.

The Monument of Cala Llentia is part of 'Rhytms of Life', a collection of fifty works that Andrew Rogers has distributed around the world. According to Rogers himself, inspired by the numerical succession of Fibonacci, in which each number is the sum of the two previous ones. Further, represents the movement of the planets around the sun.

However, it has not taken long for all kinds of theories to emerge around the monument. For many it is a simple solar watch, while others point out that it is a compass for UFOs. The fact that there are amazing views of the islet of Es Vedrà, surrounded by several legends about sightings of Unidentified Flying Objects, supports this last hypothesis.

In the columns appear several marks and engravings whose meaning is an unknown. The construction of the Calena Llentia Monument put in the foot of war to different ecological groups of Ibiza since It was carried out without permission. In fact, the City of San José opened a file of urban infringement at the time.

Despite the complaint, the work of Rogers still stands and has become one of the major attractions of the island. It is a privileged place from which to contemplate a magnificent sunset with the silhouette of Es Vedrà in the background. A space in which to relax that many use to recharge energy, so it is very likely that you will find it full of people who go there to meditate.

If you need any more excuse to visit it, you should know that shortly before arriving to Can Soleil, as some people know, you will come across the doors of Llena Creek. In this case it is about two beautiful gates with Arabic engravings. Both form a kind of room without walls in which the floor also has Arabic motifs. To this day, it is unknown who is the architect of this installation.

Go to the town of San José and, once you leave it behind, continue straight on the road to San Antonio. When you pass the town of San Agustín, take the junction that takes you to Cala Conta and Cala Bassa, which you will find on the left side of the road. About two kilometers before reaching Conta Cove you will see a dirt road that takes you to Codolar Cove. Follow it and leave behind the detour to this cove. When you reach the end you will run into a huge white house. Park and continue the road on foot. Next you will see the monument. 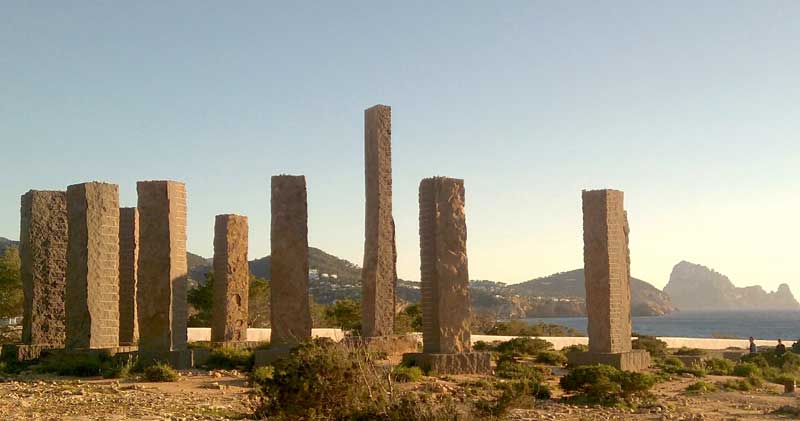 The Cala Llentia monument, in San José, is made up of thirteen basalt columns designed by the artist Andrew Rogers and paid for by
How to find us