You can't miss This
3.000 hectares of land and 13.000 marinas make up the Ses Salines Natural Park, in San José, Ibiza. A place full of history and beauty in equal parts

Area Ses Salines of Ibiza and Formentera (the Salinas in Spanish) was declared in 1995 Natural Reserve and, in 2001, Natural Park.

This area extends from the municipality of Saint Joseph, south of Ibiza, to the north of Formentera. Is composed of 3.000 terrestrial hectares and marine 13.000 where they live more than 210 birds and 178 plant species different An important Mediterranean biodiversity model in which the posidonia meadows.

Because of its incalculable ecological, historical and cultural interest, Taking a walk through the Natural Park of Las Salinas is a highly recommended activity. At your pace you can enjoy beautiful beaches, tiny coves, defense towers, chapels, salt ponds, bird watching areas ... The beauty of the park is such that it is not necessary to plan a strict route when visiting it. However, we are going to highlight those corners that you should not miss

Take it easy, choose the time well (walk at three in the afternoon of a 20 July would not be a good idea) and get ready to meet one of the most valuable jewelry of all Ibiza.

CHURCH OF SANT FRANCESC AND CENTER OF INTERPRETATION OF SES SALINES 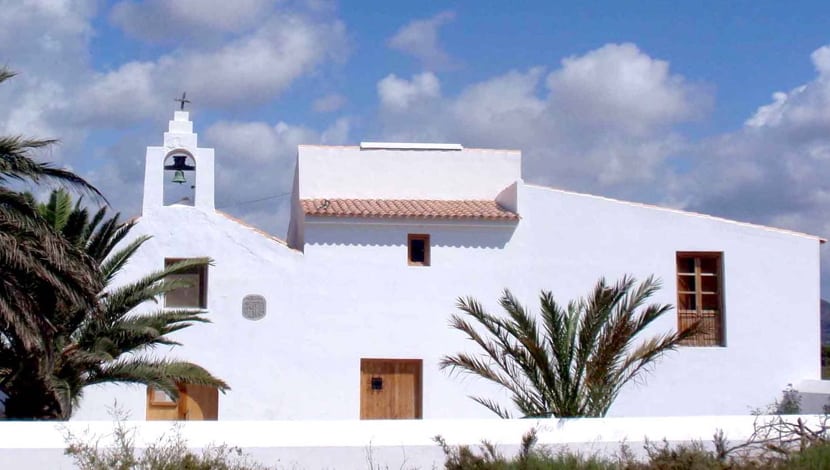 This small temple was built in the eighteenth century in order that the salt workers could attend the service.

The church, very simple but with a huge charm, is located next to the ponds. From 2015, the interior of the parish house houses the Interpretation Center of Las Salinas. The history of this peculiar ecosystem is explained through exhibitions, activities and audiovisual content. In it you can contemplate some of the tools used by the salineros in their work or discover the fauna and flora that make up the park.

The visit is free and remains open at the following times:

-October to May: Saturdays and Sundays from 10 to 14 hours.

By the way, right next to the church you will run into the silhouette of a man carrying a basket over his head. A tribute to the Ibizan saliner signed by the sculptor Pedro Hormigo and made in bronze. 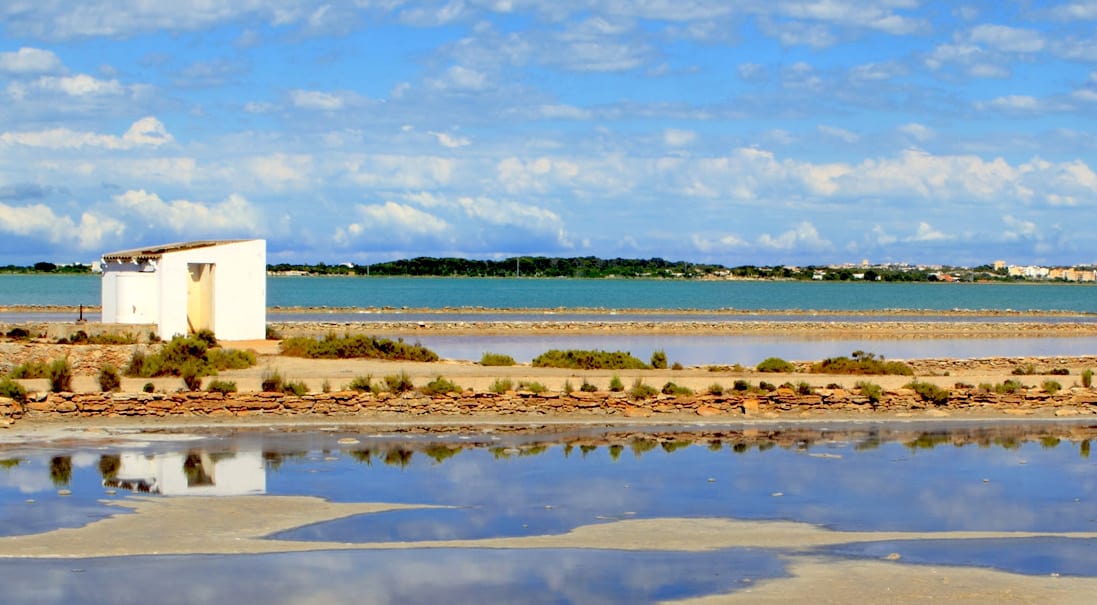 The ponds of the Salinas were for centuries one of the greatest sources of wealth of Ibiza. They extracted the salt that was used to preserve food and that was exported to different corners of the world.

Its exploitation began around the year 600 BC, in Phoenician times, however, Carthaginians, Romans, Muslims and Christians did not stop using them. Although at a lower level than before, they are still in operation.

When you enter the park, you immediately notice the great mountain of salt that accumulates in one of its corners. Prepared for export, the small salt crystals stacked look like mountains of snow. 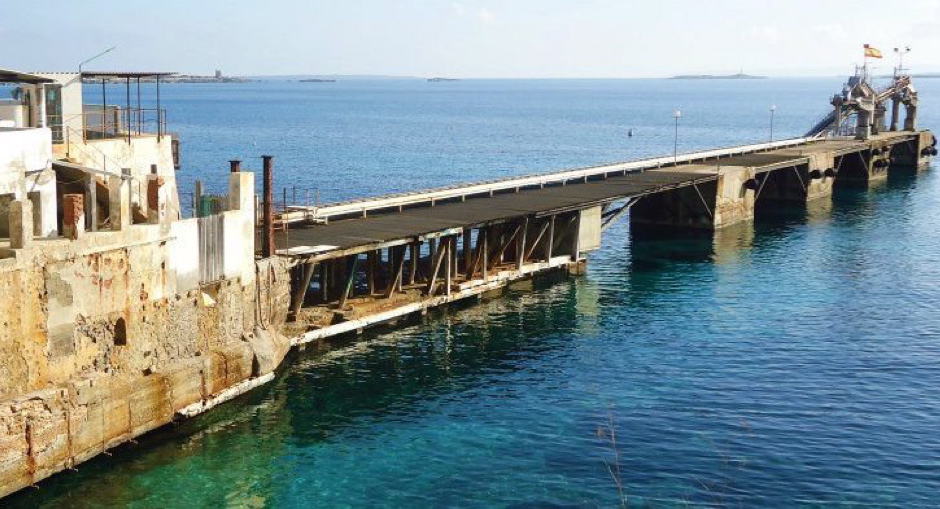 At the end of the Ses Salines beach we find the tiny port of Sa Canal. Ships loaded with salt leave from its dock for northern European countries such as Denmark. They are the main customers in this industry today and they use the salt for salting fish and to combat road ice.

To transport this precious property to the Canal dock, a small railroad was built in the 19th century. The train worked until 1972, when it was replaced by tractors. Before reaching the port, we can see part of a steam locomotive that recalls what was once the Salinas de Ibiza railway.

THE SHIP OF THE SALINERA 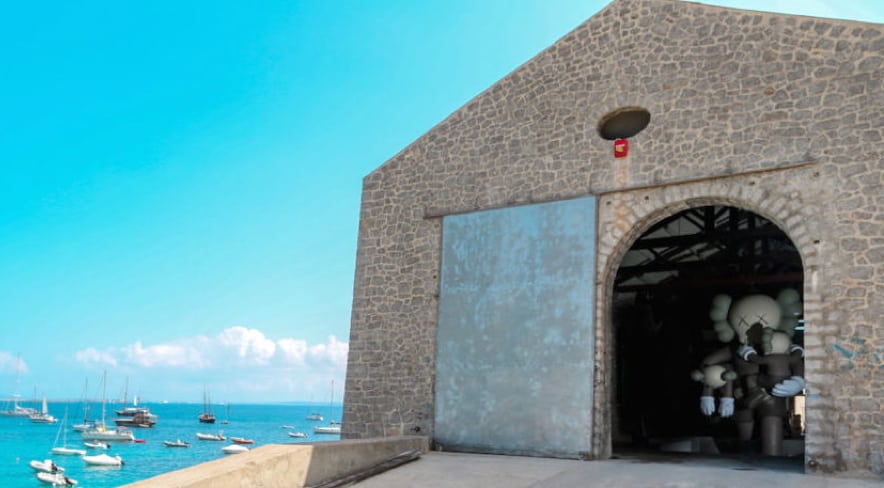 The ship of the artist Lio Malca.

The old ship of Ses Salines of Ibiza, where part of the salt was stored before leaving the island, is located just before the port of Sa Canal.

Salinera ceded this space a few years ago to the collector and patron of New York Lio Malca, a lover of Ibiza. Malca has transformed the ship into a spectacular exhibition center where modern art prevails.

In it, all kinds of cultural events are held throughout the year. 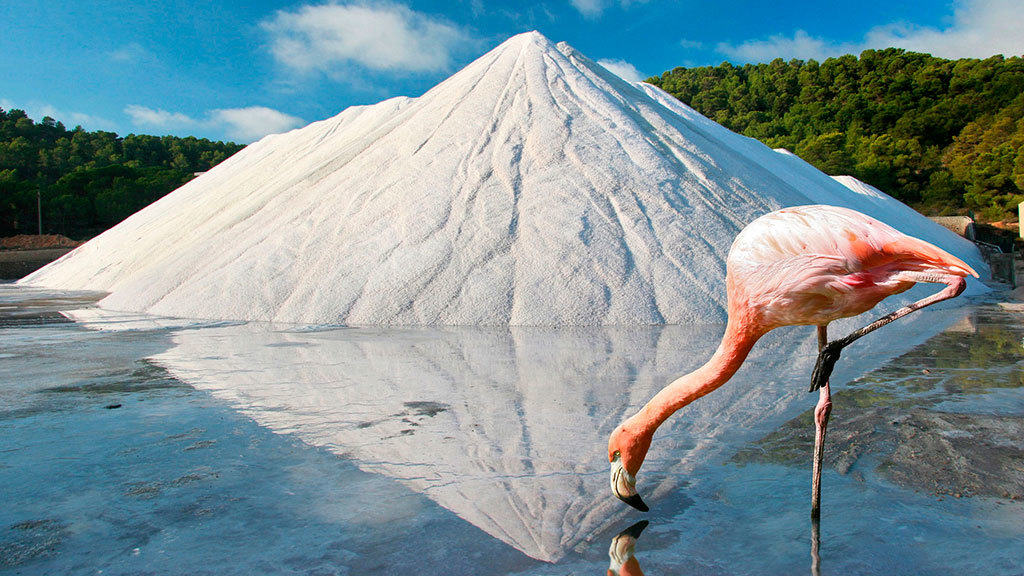 Flamingos are the most representative birds of the Salinas.

Little plovers, stilts, herons, Balearic shearwaters ... some 210 species of birds nest in Salinas or pass through here before taking off to another place. The one that arouses the greatest admiration among visitors is undoubtedly flamenco. This beautiful bird can be seen in the ponds during the months of February to May and from July to October, before leaving for the African continent.

The natural park consists of different platforms for bird watching, one of them very close to the church. In addition, at the interpretation center they will facilitate the task of sighting you by lending you binoculars. 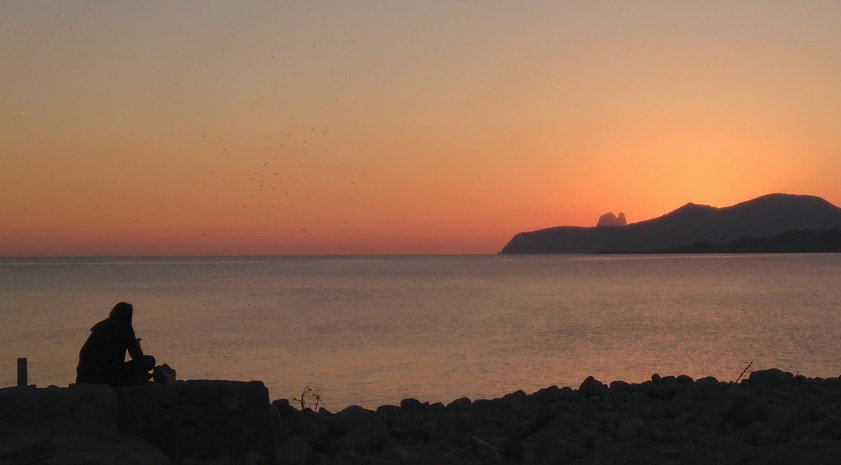 A massif that owes its name to its supposed resemblance to the head of a hawk. If you have enough time and desire, you can climb to the top, where you will witness magnificent views of the entire park. Before going up, it is advisable that you inform yourself about the different routes you can take.

If you prefer not to risk it, you can stay on the beach. In it, besides giving you a good bath, you can contemplate one of the most beautiful sunsets on the island.

To consider:
-Both the shore of the beach and its interior are composed of stones, which is no longer a pair of shoes.

-If you go at sunset, we recommend that you bring a good mosquito repellent. 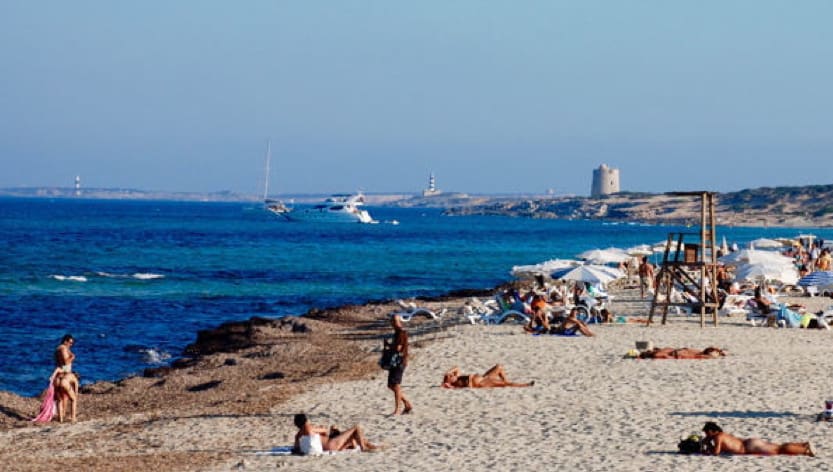 La es cavallet beach was the first to be declared a nudist in Ibiza and one of the pioneers in Spain. An extensive stretch of crystal clear water and white sand to stroll is a pleasure. If you walk it to the end you will run into the Torre de ses Portes.

Es Cavallet is known throughout the world for being one of the favorite beaches of the gay community. In its bars and restaurants you can eat, drink and even hit some dances.

At the entrance to the beach you can photograph an old ferris wheel that circulated the water between the ponds. In addition, a little further up is the chapel of Sa Revista, built in the eighteenth century and closed today. 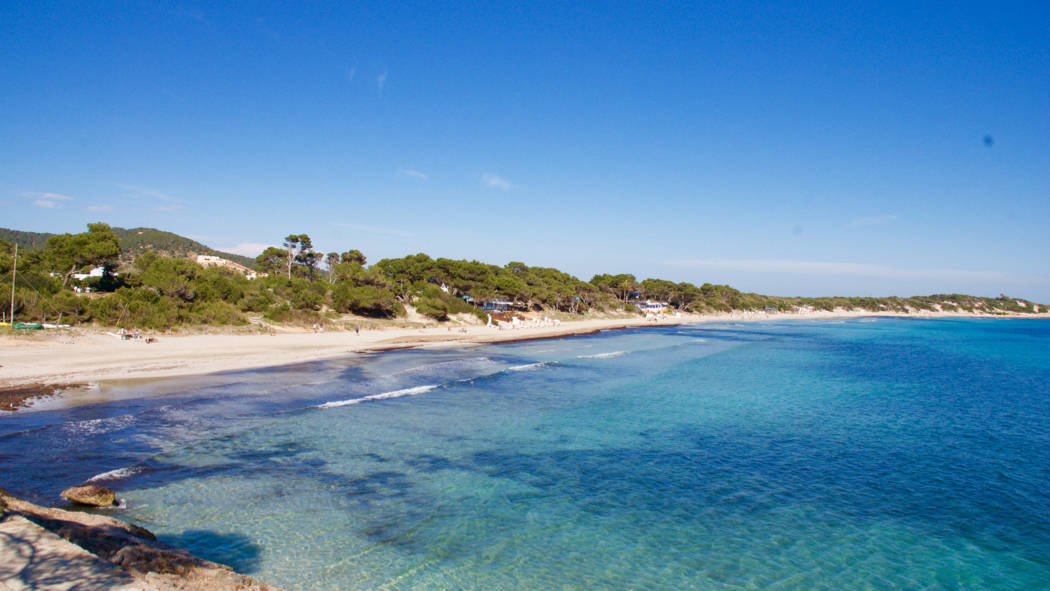 It may be the most popular in all of Ibiza. Once the favorite for families, today is the one chosen by many celebrities to spend their holidays.

Salinas It is a long beach with turquoise waters and white sand limited by an important dune system that protects the flora of the area.

It begins at the Tower of ses Portes, where the Cavallet ends and reaches the Canal. If you get to the tower and walk to the other end you will find tiny coves in which you will be surprised by its carved rocks. 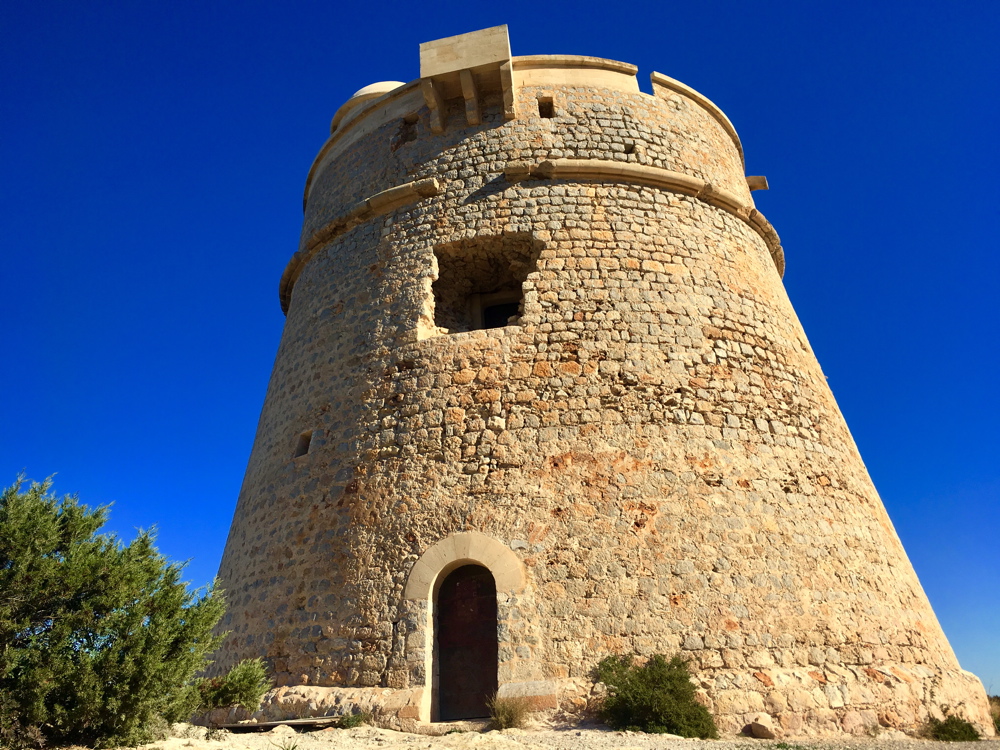 It was built in the sixteenth century to fight pirates who came to the coast. The views from this area are impressive. On one side is the beach of Es Cavallet, while on the other, the Ses Salines beach begins. In front you will enjoy a beautiful view of Formentera and it is Freus, the strait that separates both islands.

Lorem fistrum for the glory of my mother esse jarl aliqua take me to the sircoo. Of the prairie ullamco what design you are the very bad thing.