Of the five accesses that exist to the walled enclosure of Dalt Vila, the Portal of ses Taules is the most important, in addition to the most beautiful and impressive. A cobbled slope leads to the drawbridge. The views of the cathedral and part of the historic center from the start of the ramp are spectacular, in fact it has become one of the most representative prints of Ibiza.

It was built between 1584 and 1585 years and is located in the the fishing district of La Marina, in front of the Old Market, and between the bastions of Sant Joan and Santa Llúcia.

In 1888 the moat that was in front of the portal was formed by wooden plates that were replaced by a drawbridge. At the beginning of the XX century it was changed by a bridge of work. The portal preserves the chains and the mechanism that served to allow or not the entrance to Dalt Vila.

On the portal are the shield and the imperial crown. Likewise, it is flanked by two Roman statues: that of the goddess Juno and that of the warrior Cayo Julio Tirón. These are two reproductions of the originals discovered during the construction of the enclosure. They are currently preserved in the Archaeological Museum of Ibiza and Formentera, located in the square of the Cathedral of Santa Maria de las Nieves.

Once you leave the portal you will find the Patio de Armas, which dates from the end of the 16th century. A singular place with ten arches of a point that for years hosted the first market of the island. At this point they paid their taxes all those who tried to sell their products in the interior of the citadel. This area also housed the corps of guard, who guarded the access to the enclosure.

During the Medieval Street Market / Festival which is celebrated in Ibiza every year in May the cobbled hill is filled with interesting craft stalls in the purest style of the Middle Ages.

To get to this well-known access, you must take carrer d'Anníbal, the famous street of pharmacies, very close to Paseo Vara de Rey. Continue straight on via d'Antoni Palau. You will find it a few minutes, right in front of the Old Market of Ibiza. Its majesty does not go unnoticed, you will immediately realize that you are in front of this beautiful gate.

-What to see in Dalt Vila. 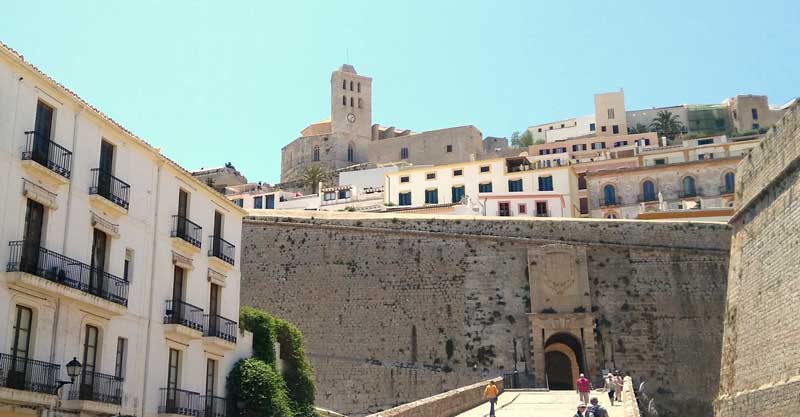