You can't miss This
The Church of the Puig de Missa is situated on the top of a hill. A tiny urban center that will surprise you with its beauty and its views of the whole of Santa Eulalia

It could be said that Puig de Missa is one of the most beautiful churches in Ibiza or at least one of the most striking. Part of the blame is the fact that it is located on a small mound, at 52 meters of height, at the entrance of the municipality of Santa Eulalia, a privileged place on the town of Rio with a extraordinary views.

The area is composed of religious temple, the cemetery, a set of typical Ibizan houses and several museums. The whole hill was recognized as Picturesque landscape in 1952.

La Church It is the most outstanding part of this small urban center. Like many others in Ibiza, it was built in order to protect the population from pirate attacks. Although throughout its history underwent several modifications, it is believed that it was raised in the centuries XVI and XVII. There are researchers who claim that Giovanni Battista Calvi, architect of the walls of Dalt Vila, also designed the Puig de Missa.

The structure is formed by the nave and the tower, which were later added different constructions in order to disguise its fortification image as two side chapels or the house of the priest. Several arches and a careful sabina roof form its beautiful porch. The interior, baroque style, It is broad but simple.

We advise you to save some time to walk outside the church. Lose yourself in its streets and discover its small cemetery and different points from which to contemplate the whole town, with the river at its feet and the sea in the background. Right next to the temple you will see a charming little house with striking blue doors and windows in which the Barrau Museum, dedicated to the Catalan painter Laureà Barrau. If you go down a little, you will run into the house of Can Ros, which welcomes the Museum of Ethnography.

The white walls of the Puig de Missa contrast with the color of the windows of the houses, the crosses or bougainvillea and the baladre that dot the area. Beautiful prints that have been scenario of different fashion campaigns on the island If you forget your camera you will regret it!

Take the road from Ibiza to Santa Eulalia and, once you reach the roundabout that is before the bridge that leads you to the town, take it to the left. Continue straight ahead and take the next roundabout to the right. Go straight on and take the second street on the right. At the end of the road you will see the indications to climb Puig. You can access up to the car and park it in front of the church, but watch carefully, the alleys are narrow and steep. 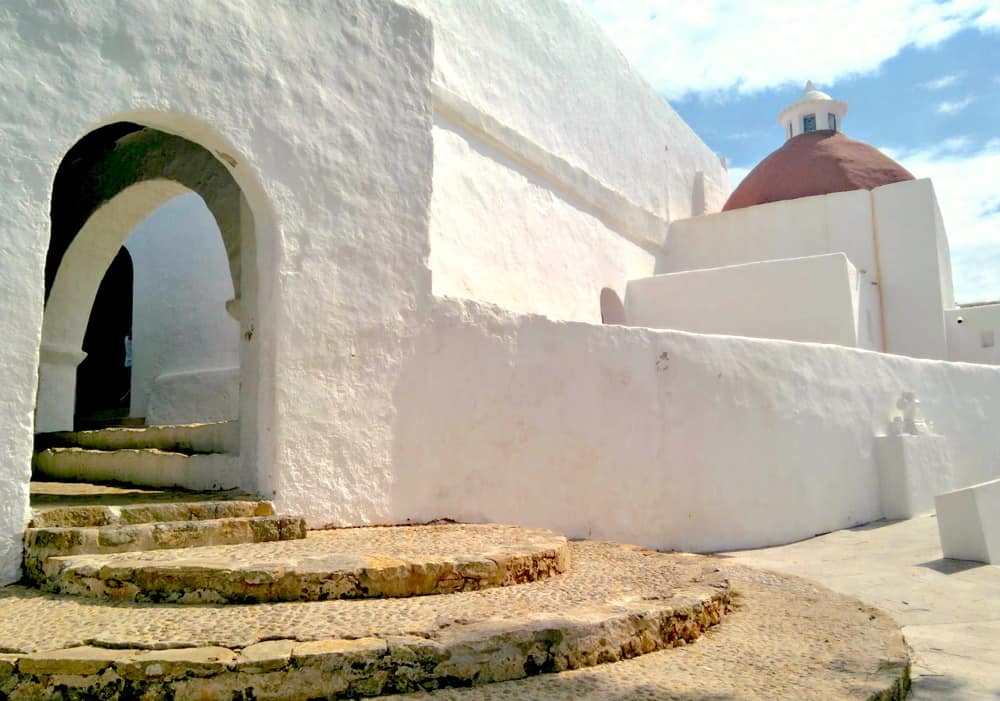