You can't miss This
Almond blossoms, beautiful cliffs overlooking the sea and the amazing tranquility of the countryside of Ibiza await you in Santa Inés, San Antonio

Santa Inés de Corona, in San Antonio, is one of those villages that fall in love with the naked eye. Tiny but with some of Ibiza's most interesting plans, if you spend a few days on the island it's worth it to get closer to see it.

This core is composed of two main streets, its church and two restaurants. The houses that dot the area are architecture typically ibicenca and they are distributed by the lands that conform the town.

La Church of Saint Agnes It stands out for its simplicity. Its whitewashed walls began to rise 1785 late and the work ended in 1812. Right in front of it you will find one of the most mythical restaurants in Ibiza: Can Cosmi. Sit on your terrace in the sun at any time of the year and taste one of its famous tortillas It is something you must do at least once in your life. A local with more than 60 years of history that worked as a grocery store from town. With the passage of time, tourists and locals began to visit Santa Ines and ask for something to take to the stomach after the long walk. It was then that he began to serve three or four dishes that conquered immediately. The views and the family atmosphere and peace of Can Cosmi makes it a favorite of residents.

Once you reach the village you will see the Pla de Corona, an extensive red earth plain divided into different installments. Almost all of them are almond trees, the main attraction of Santa Inés. If you are lucky enough to be able to travel to Ibiza to end of January or in February, Do not forget to visit the town. Almond blossom and dye the plain of beautiful colors white and pink. A beautiful print difficult to forget.

The fertility of the land made it be used for the sole purpose of cultivation, so it is virtually free of housing. It is undoubtedly one of the places most valued by hikers, who organize trips throughout the year. After visiting the almond trees in bloom, the walk under the full moon is one of the most famous.

The other great attraction of Santa Inés are the so-called Heaven's doors, an area of high and steep cliffs with spectacular views. When you get to the village and see the restaurant Can Cosmi, take the road to the left and you will see the signs that lead you to this magnificent place.

The image of the sea and Islets of Ses Margalides since the cliffs of Es Amunts, full of green pines, is simply spectacular. You should know that, from the 15 from June to the 5 from September approximately, you can see from here one of the sunsets more beautiful.

If you continue skirting the cliff to the left you will reach Sa Penya Esbarrada, remains of a payesa house from the Muslim era. If you prefer to stop along the way, take the opportunity to take a seat in the restaurant the gates of heaven. You'll see it right there. Take some typical Ibizan herbs or try the most famous recipes of island gastronomy.

From San Antonio you will have to leave the municipality towards Ibiza and then, before the Lidl supermarket, you will see a detour on the left that leads you to the village. 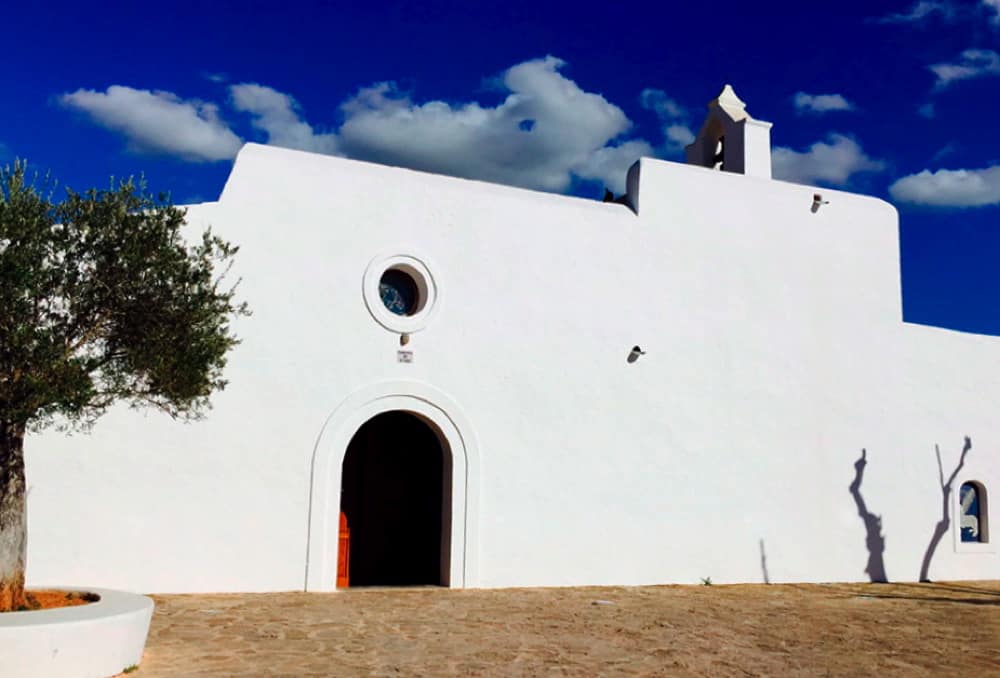 Almond blossoms, beautiful cliffs overlooking the sea and the amazing tranquility of the countryside of Ibiza await you in Santa Inés, San Antonio
How to find us