You can't miss This
The Paseo de Vara de Rey or s'Alamera is the nerve center of the city of Ibiza. A beautiful square where

All cities in the world have a nerve center in which are concentrated a large number of shops, businesses of restoration and, therefore, people. Ibiza is no less and in this case we could say that this area would correspond with the famous Paseo de Vara de Rey or s'Alamera. This and its surroundings make up without a doubt what we know as the center of the city.

The famous promenade is located surrounded by the walled town of Dalt Vila, el neighborhood of the Marina and Port of Ibiza. East 2017 we proceeded to pedestrianization of all the square, being therefore closed to traffic. Without entering into discussions about its new aesthetic, the truth is that today the area seems to have a greater life. The terraces of the restaurants and cafeterias remain full at all times and the children can run from top to bottom without danger.

The name of the walk refers to the statue which occupies the center of it. In it appears the figure of General Joaquín Vara de Rey y Rubio raising his sword and climbed a small mound. The general, born in Ibiza, fought in the War of the Independence of Cuba of 1898 and was defeated by the North American troops in the battle of El Caney. Next to him we can see one of his men and, a few steps below, two female figures that represent glory and Spain. The latter simulates writing the legend "A Vara de Rey" on the same mound.

The architect August Font Carreras and the sculptor Eduard Alentorn were in charge of the realization of the monument, which was opened in 1904 counting on the presence of King Alfonso XIII.

The Paseo de Vara de Rey is surrounded by colonial style buildings which give it a special charm. These include the popular Hotel Montesol, in one of the corners, a construction that dates from 1933 of neocolonial character. It was declared a 'Good of Cultural Interest' by UNESCO. Along its history, Cafe Montesol It has been a refuge for hundreds of artists waiting for the arrival of inspiration on the terrace.

Hard Rock Cafe Ibiza has its headquarters in this square, where you will also find one of the most mythical restaurants on the island: Ca n'Alfredo and a Tourist information office.

Epicenter of the life of Ibiza

Throughout the year the walk becomes the main stage for all kinds of events. The Christmas concerts, just like the jumble sale, are always located here. It also exhibitions of handicrafts, important events, popular festivals or the typical book fair.

Until recently, the ride also featured 'El Vara de Rey 'clock, a clock of questionable beauty that the Ibicencos turned into the meeting point of any important event. With the remodeling of the walk, this was replaced by a kind of solar clock in the shape of a metallic tree that does not just convince the population.

It was also home of one of the first cinemas of Ibiza: the Serra, that was shot down also taking advantage of pedestrianization to start another business.

As a curious fact, it should be noted that it is also known as Paseo de s'Alamera. In fact, at the beginning of 2017 a referendum in order to determine if it kept the name of Paseo de Vara de Rey or the official place name was recovered. The poll was quite close, but finally Vara de Rey won with a tight 53'07%.

Get up to this beautiful square, take a seat on one of its terraces and relax as you become a witness to the movement of the hundreds of residents and tourists who spend every day here.

If you are in the port of Ibiza head to the beginning and, with your back to the sea, walk left direction, by the Avenue of Bartomeu Ramon i Tur. You will see it a few meters away. You can also get to one of the main arteries of the city: Avenida España. The Paseo is right at the end of it.

By the way, right in one of the parallel streets you will see the Plaza del Parque, Another important point of the city. 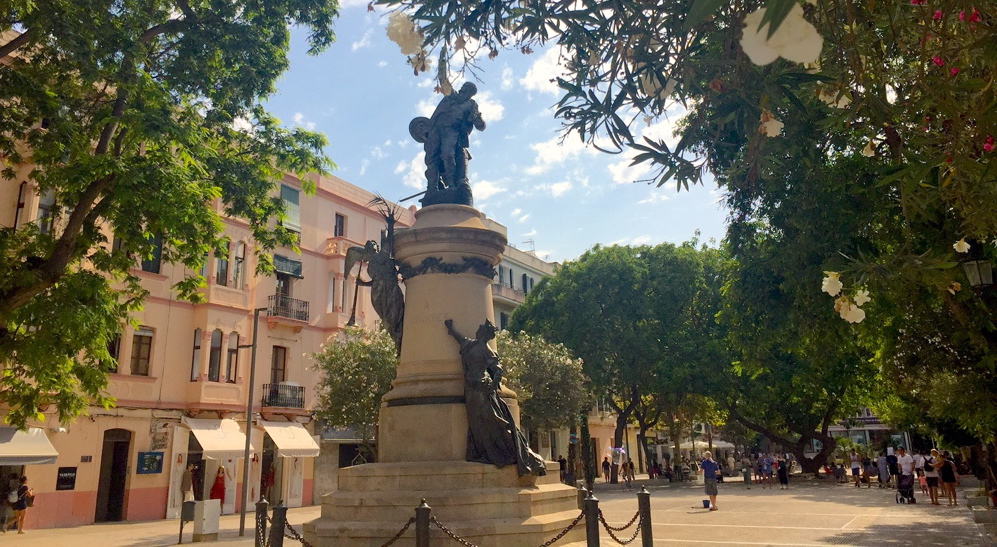 The Paseo de Vara de Rey or s'Alamera is the nerve center of the city of Ibiza. A beautiful square where
How to find us