It's Rebost of Can Prats. At San Antonio, offers you the opportunity to try the Authentic ibizan gastronomy, the one of all the life, at a spectacular price. Not only its food gives off that air of the deepest Ibiza, but the architecture of the restaurant as well. In fact, Es Rebost de Can Prats is a house payesa of city that has been standing since 1904 y his store was the first grocery store of the municipality There is nothing!

In their kitchen they focus, mainly, on the quality of ingredients that employ maxim. This is why they make many seasonal dishes and desserts. For example, you can eat Cuinat at Easter or fried porcella. As for the sweets, in June they cook one of the most typical of Ibiza: macaroni from San Juan and, of course, the dessert that best matches them: coca de apricots.

All the products they use come from ibicencos suppliers. The fish they serve is caught a few moments before in a llaüt and the chicken and lamb are peasant. They also have a own orchard from which they are supplied so that the freshness of the ingredients is fully guaranteed!

In your letter you can not miss the sofrit peas, the rice of slaughter or the frit of asadura, apart from some Dishes of the day with those who, often, surprise the staff. Besides all this, if you can be proud of something, it's that your aioli be, as the clients assert, "The best of Ibiza", a difficult title to hold on an island where almost 90% of restaurants serve this starter.

Noon, from Monday to Friday, they offer their diners a very complete menu in which alone 15 euros You can choose between two first, two seconds, bread, allioli, dessert and drink. Whenever you approach Es Rebost de Can Prats you will have an option according to the season: in winter its dishes are more forceful, more of a spoon, while in the summer, above all, freshness.

The wines are also of island origin. In its varied menu you will find of the wineries Can Rich, San Mateo, Formentera… And some Spanish.

For their part, desserts are another thing you can not miss. Fló, greixonera, flan, confites peasants… All homemade and cooked with a special affection.

Tras 21 open yearsNot only residents come to Es Rebost de Can Prats, but also those tourists who want to know each and every one of the peculiarities of Ibiza, starting, of course, with its rich gastronomy.

Octopus frit is one of the most successful dishes among diners so hurry up and ask if you want to try it! And, for when the heat tightens, the best thing is a good salad of crosts with dried fish from Formentera or a black rice with prawns and crayfish.

Once in San Antonio, in summer, go down Calle Ramón y Cajal and, when you reach the statue of 'Es Verro' (the peasant who is carrying out the traditional cry of the island), take the roundabout to the left. If you go there in winter, you can take Ample street directly until you reach the town's Church and from there you will see it. 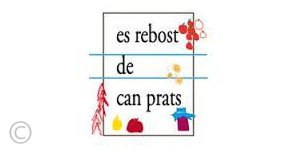